Instead, there's the faithful Internet, where, of course, you can find anything, including a faithful reproduction of a good radio station.

Starting at 1 pm Saturday, our favorite local on-line music box site, Cerritos College's WPMD.org, will add another great program to its already excellent "Saturday Block," with "Garage-Mania," hosted by former KWIZ jock Robby Russell , with sidekick Nurse Cheril , the Diva of '60s garage and psychedelic radio. The duo will be diving deep into Robby's Record Vault to emerge with some aural oddities that haven't been spun over local airwaves for three decades.

Listen to a 5 minute demo of "Saturday Block" Shows

Also part of the Saturday Block:  Funkzeum with Calvin Walton from 3 pm to 4pm
(all times are Pacific Time)

WPMD on the Net Home Page 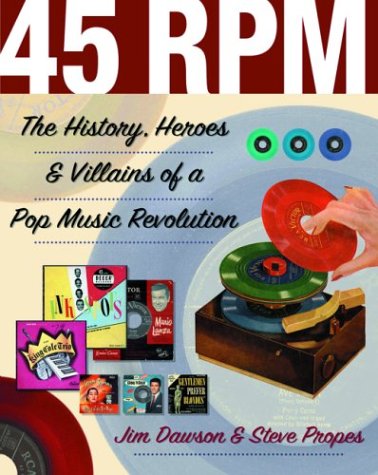 From 1981 through 1989, Propes spun his rare and original (and sometimes scratchy) 45s on KLON.  He played mostly rhythm and blues, blues, soul and doo wop and he'll continue to do so on WPMD.   In addition, he's written (or co-written) a half dozen books on rock & roll / r&b history and has interviewed hundreds of people who've made the music what it became and what it is.

In addition to r&b, soul and doo wop, Steve will spin rare surf, rockabilly, garage, lowrider, girl group, gospel (and even hits) as well as any other rare and exciting music he thinks will fit into the show.  Requests are welcomed.  If you're a collector who has some rare and exciting 45s, let us know asap and maybe you can come on the show and feature those sounds that motivated you to buy those 45s.

In a sense, Propes' WPMD show is the answer to the question Steve is also asked by his many fans who miss his Sunday morning r&b show on KLON:  "when are you going to get on the radio again?"

A music show, a talk show, a circus and a therapy session – all rolled into one show.  News, Politics, Sports and Lifestyles, stirred into a mix of music that celebrates the 50 year history of rock music.

When the legendary LA “heavy metal” station, Pure Rock 105.5 KNAC-FM, went to Spanish programming in 1995, Stark had hosted “Pure Rock Talkback” and produced the “Thrasher Morning Show” for the final five years.  Stark also was an entertainment correspondent for ABC Radio News, logging hundreds of hours of interviews with some of music’s most important artists.

“Rock 50” will combine Stark’s interview “archive” and rare album tracks with fresh discussions from a parade of unique pundits and artists, that will inform, entertain and enlighten.

A semi regular co host on program is Black Sabbath's Bill Ward, who plays his favorite tunes and gives insight into his life over the last 30 years with the band that helped create and shape heavy metal music.

Listen to a seven minute demo of "Rock 50"

Garage-Mania is hosted by Robby Russell, a well respected LA radio and web personality and Nurse Cheril, the Diva of 60s garage and psychedelic radio. Robby Russell shook up LA airwaves in the 90's on KWIZ-FM and was voted LA's most annoying DJ ever in a readers poll from the LOS ANGELES TIMES.

After his gig with KWIZ, Robby started his Garage-Mania Show on www.alternative.nu and quickly became a world-wide favorite on the Internet. Using live streaming audio and video over the web, Garage Mania started the Reality Radio trend. Now he has joined the staff on WPMD.

Robby and Nurse Cheril promise that GARAGE-MANIA will play the most exciting 60's Garage and Psychedelic music you NEVER heard before.  Hear music from Robbys Record Vault that has not been heard in over 30 years. This ain't no playlist programmed by the suits, baby!

WPMD on the Net Home Page